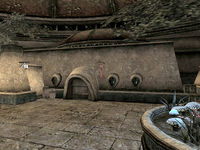 This is a fairly sizeable, but nearly deserted temple. There are no shrines, and the only occupants are Vaval Selas, who offers a variety of ingredients, potions, and spells for sale, and a few rats. You may freely take anything from this temple without consequence, save what's in Vaval's quarters.

As you enter, you will find yourself in a dome room with an ash pit in its center. In the northeastern corner is a copy of the book The Book of Dawn and Dusk resting on a lecturn. The wooden door in the northwestern corner leads downstairs to a long hall with six rooms connected to it. The first room, behind a locked wooden door, is a library. It offers a copy of the book The Doors of the Spirit on a lecturn and copies of The Cantatas of Vivec, The Book of Dawn and Dusk, The Pilgrim's Path, The Consolations of Prayer, and Lives of the Saints lying on the shelves opposite the door. The room across from the library is where Vaval Selas resides. In the southeastern corner of the room are shelves holding two bottles of shein, two bargain rising force potion, two cheap disease resistance potions, a cheap restore fatigue, cheap restore agility, and a cheap rising force potion, as well as a small chest containing 10 random ingredients. On the uppermost shelf are several sacks storing cheap food. Nearby is a locked wooden chest containing most of Vaval's merchandise: