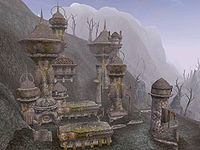 Odrosal is an Ash Vampire Citadel in the Red Mountain region, inside of the Ghostfence.

An old Dwemer fortress, Odrosal is now named after the residing Ash Vampire Dagoth Odros. This is the place where the Keening Artifact can be found during the Main Quest. The ruins are divided into two areas: the Dwemer Training Academy and the Tower.

Enemies here include Dagoth Odros, a Flame Atronach, and a Golden Saint. Dagoth Odros has a key and the Amulet of Heartfire. A few dead dreamers and a dead hero lay slain as evidence of the constant struggle to regain the artifact. A number of Dwemer weapons and armor pieces can be found here, as well as a number of potions and a repair hammer. A door connects to the Tower.

The tower is converted to a shrine with the artifact Keening in the center.