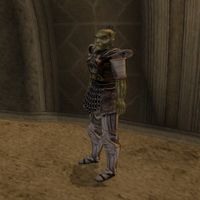 Nash gro-Khazor is an Orc guard and a trooper of the Imperial Legion. He is found inside of Madach Tradehouse.

Like all Orcs, he has a natural resistance to magicka, and can boost his health, fatigue and attack for short periods, at the cost of agility, but otherwise knows no spells.