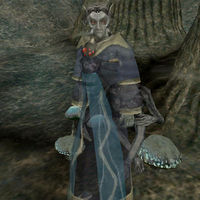 Hort Ledd was a Dunmer mage who lived in Morrowind during Morrowind's war with the Empire. He was one of the failed Incarnates in the Cavern of the Incarnate. He gave the Nerevarine his robe and Sithis.

Greeting — Welcome, Incarnate. I am Hort Ledd. I was not the one. But I wait and hope. Ask, and I shall tell you my story.

my story — I died four hundred years ago, in the last days of turmoil and unrest after the Empire came to Morrowind. I was a thinker, and not a doer, and though I was marked by the stars, I was not a hero. Take these things of mine. My bones won't complain.