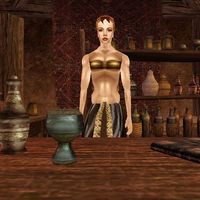 Helviane Desele is the owner and proprietor of Desele's House of Earthly Delights, a gentleman's club in Suran. She does not have much for sale, other than Moon Sugar and Corkbulb Roots, which grow on several plants in the establishment, so she will have a (slowly) restocking supply. She also has plenty of liquor to sell, but apparently not to you. She will purchase any ingredients you might have. Keep in mind though that, like most non-Khajiit merchants, she will not do business with you if you are already carrying Moon Sugar (or Skooma). Desele evidently owes some protection money to the Camonna Tong, and the Fighters Guild will employ you to collect it.

Helviane Desele wears an expensive skirt and matching shoes. Furthermore, she carries two hundred drakes and the key to a locked room in her establishment. Aside from her natural bonus and resistance to magicka, and her ability to shield herself for short periods, she knows no spells.

At the beginning of each conversation, Helviane Desele greets you with the following words:

During this quest, Eydis Fire-Eye wants you to collect a debt that Helviane Desele apparently owes to Manos Othreleth, a prominent member of the Camonna Tong. Sketchy though this contract is, it is perfectly possible to simply do as you are told and collect the gold from Helviane, provided that her disposition towards you is high enough:

If you mention her debt again after she has given you the gold, she will say:

However, it is also possible to complete the quest by paying Helviane's debt yourself, as obviously, Eydis has no way of telling whose two hundred drakes you are offering to her. In that case, Helviane will have the following to say:

Towards the end of the construction of your stronghold, you are told that you will need to attract some female settlers. There are several ways in which that end can be achieved, of which speaking with Helviane is one:

If you mention this topic again after Helviane has agreed to ask around if anyone is interested in moving to your stronghold, she will say:

If you ask Helviane Desele about the latest rumors, she will tell you about a strange man whom she recently saw near Suran:

This is one way to start the quest Umbra.