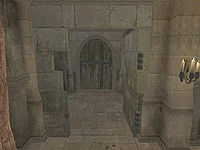 The entrance from the Imperial Commission

Ebonheart, Underground Caves are a set of caves underneath Ebonheart occupied by Furius Acilius, a deserter from the Imperial Legion.

There are two entrances, one hidden in the Imperial Commission behind a locked door, the other underwater to the north of the Grand Council Chambers.

In this cave, you can find a pilgrim's lantern, several glass weapons, Lord's Mail, and many mushrooms and rats to gather low-grade ingredients from. There is also an area reachable by levitation, and several Rising Force potions are lying around, both on the ground level and up there, assuming you don't already know the spell or have your own potions. Once up there, you can find an enchanted glass longsword and random loot stored in cloth sacks and a crate. There is also a locked and trapped chest. To the right of this area is a pool of water. Almost hidden, in the back, is a barrel and a crate.

The only person in these caves is Furius Acilius, the man who stole the Lord's Mail. You can speak to him, but he will attack you shortly thereafter. The only other enemies you will encounter are the rats.