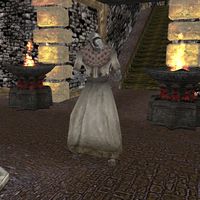 Dagoth Baler is an Ash Ghoul in the service of the Sixth House. He can be found at Kogoruhn, in the Hall of the Watchful Touch. Dagoth Baler is one of several Ash Ghouls who is capable of speech, provided you can sneak up on him or cast Calm to stop him from attacking. Oddly enough, he is also a merchant, though he has nothing much to sell and no gold with which to buy things. He does, however, provide repair services at base-cost, which you can take advantage of.

Because he is set in-game, probably by mistake, to be "undead" instead of "humanoid", Turn Undead spells work against him.