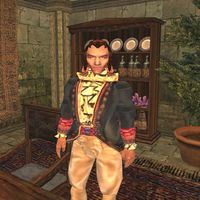 Canctunian Ponius is an Imperial noble and the Factor of the Ebonheart agency of the East Empire Company and the organization's Factor-in-Chief. He can be found at the Company Hall in the city. House Hlaalu has an interest in securing the ebony trade rights from the Company, and he is the man to talk to about it. He has also made a pledge to the Imperial Cult which he is unable to honor due to some money embezzled by a former clerk.

He wears an extravagant shirt, pants, shoes, and ring. Curiously enough, he has a good skooma pipe and five portions of moon sugar in his inventory, along with a maximum of 200 drakes. Aside from his natural charm and ability to absorb fatigue from others, he knows no spells.