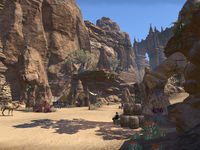 The Scar (also known as the Scar of Anequina)[1] is a large desert that runs through Anequina, in the province of Elsweyr. The Scar acquired its name due to the nature of its geography. It is intrinsically carved into the region, leaving the surrounding area wounded with harsh wastelands and treacherous cliffs, and the incision as a winding chasm. It is the home of Anequina's outlaw and the criminal underground, which is exemplified by their largest settlements, Orcrest and The Stitches. The Scar has been divided into many smaller regions named after it, such as the Scar's End and the Scab Ridge. It also contains several landmarks, including the Ashen Scar, Scar's Edge, and the Weeping Scar.

Because of the Scar's intrinsic and natural design, it has been the subject of Khajiit myths and legends, specifically on its origin. It has been speculated that the Scar was created from the legendary Merethic hero, Khunzar-ri. Although some myths point to Alkosh, Dragon King of the Cats. It is said that Alkosh marked the region with his bare claws. But regardless, the Scar has been referenced since ancient times.[2] But while its origin is riddled in speculation, the Scar's culture is not. Before it became the Scar as we know it, it was known as the Kingdom of Meirvale, one of Elsweyr's sixteen kingdoms, known for their distillers and brewmasters.[3] The people would drink to their heart's content, that was until the Thrassian Plague in 1E 2260. The sixteen kingdoms each fell to the dangers of the Thrassian Plague, including Meirvale. What little of the people's kingdom culturally became the Scar, where the Khajiit drank themselves into sorrow.[1][4] What remained of Meirvale was absorbed into the growing powers of the Kingdom of Anequina, as was the Scar.

But as far as the ancient past, the Scar has always contained the north's outlaws. Another nation in the region, the Kingdom of Orcrest was known for its thieves and rogues, as far as the Merehic Era.[3] And for an unspecified amount of time, the town known as the Stitches has always housed Elsweyr's outlaws and crime lords.[5]