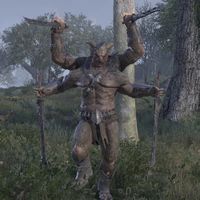 Ruinachs are a race of four-armed Daedra that serve as Mehrunes Dagon's elite marauders, and have come to refer to themselves as "Dagon's Fifth Hand". They are fanatical followers of their lord, and believe themselves an extension of his will. Indeed, as the physical manifestation of Dagon's fiery malevolence,[1] they share their lord's destructive tendencies. And although they are unintelligent, they make up for it in brutish strength.[2]

In 1E 2920, the Skeffington Coven of High Rock took in an exiled Dunmeri woman named Turala, the former lover of the Duke of Mournhold, Brindisi Dorom.[3] However, after a trip to Wayrest, the Skeffington Coven massacred by an Orcish raiding party. Turala was falsely led to believe that the massacre was the work of assassins sent by Brindisi Dorom himself. Enraged, the witch called forth the Prince of Destruction to destroy Mournhold and slay her former lover, and he complied.[4]

During the carnage, Almalexia and Sotha Sil arrived to stop the Prince. The battlefield was lit by a barrage of flame which fell indiscriminately. Almalexia plunged Hopesfire into Dagon's flesh and carved him from within. Meanwhile, Sotha Sil, enacting vengeance for Ald Sotha, used "god-bronze whips" to lash the Prince into submission. Wounded, Sil allegedly whispered Dagon's Nymic, and the Prince "exploded throughout all time".[5][6] The Clockwork Apostles believe that this battle between Mehrunes Dagon and the Tribunal marked the birth of "Sarmissonays'um ghoul-thing[s]", which emerged from Dagon's own flayed skin.[5] [1] The Kyn see this as nothing more than "inane blunder".[1][2]

Circa 2E 582, Ruinachs were deployed to the Blackwood region.(?)