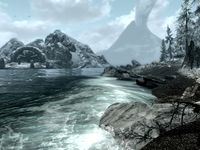 The Felsaad Coast is the snowy, lightly forested northeastern region on the island of Solstheim. The Isild River separates it from the Moesring Mountains region to the west, and it fades into forest to the south. The area is relatively rich in wildlife; many horkers, bristlebacks, snow wolves, and other creatures roam the land. Skaal Village and Thirsk are both located here, as are many barrows and ice caves.[1][2]

Before the Red Year of 4E 5,[3] the Felsaad Coast was bordered by the Isinfier Plains to the southwest and Hirstaang Forest to the south. The area was prone to blizzards, and like the rest of Solstheim, it was home to pine trees as well as shrubs like belladonna and holly.[1] 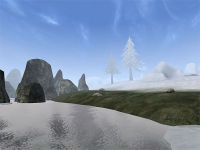 The Felsaad Coast circa 3E 427

The cataclysms of the Red Year substantially changed the landscape of Solstheim.[3] The Felsaad Coast was evidently shattered, as numerous large islands sprung up along the coast and the size of the region shrunk significantly. The coastline itself is substantially different, as a bay has formed to the north, and a peninsula now sticks out from the northeastern tip of the island. What remains of the Felsaad Coast is still largely reminiscent of its pre-Red Year state in terms of its climate, wildlife, and populace, though the regions bordering it have drastically changed.[2]