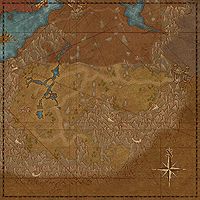 The Fallen Wastes is the southernmost region of the greater region of Bangkorai. The entirety of the Fallen Wastes is considered geographically to be on the Hammerfell side of the border, although around 2E 582 it was controlled by the High Rock city-state of Evermore and considered a part of High Rock by the Bretons.[1][2][3] The capital of the region is the city-state of Hallin's Stand, located on the northern end of the Dragontail Mountains, just before the Bjoulsae Estuary. The ancient ruins of the Hall of Heroes is the gateway to the Redguard afterlife, the Far Shores. Many Redguard heroes were buried in the Hall of Heroes, including Frandar Hunding and Makela Leki. Among other large ruins in the region are Nilata Ruins and Razak's Wheel, which are Ayleid and Dwemer respectively. The Bangkorai Garrison marks the northern end of the region and connects both provinces. The eastern gates lead into the region of Craglorn.[1]