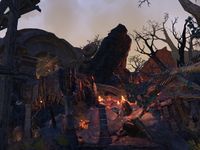 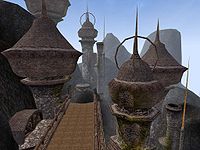 Bthungthumz in the Third Era

Bthungthumz, also known as Ald Carac, is a Dwemer ruin located in the northwestern section of Vvardenfell. They served as Dwarven fortifications that date to the War of the First Council, early in the First Era.[1]

It was occupied by the Circle of Champions circa 2E 582 to serve as a site for bloodsport.[2] In the Third Era, an adventurer was tasked by House Telvanni with retrieving the ring of Dahrk Mezalf, a dwarven spectre that was said to have worked as a smith under the great Dwemer inventor Kagrenac.[3]