There are two things you need to start writing code:

If you are new to Java, it is suggested you get the NetBeans and JDK bundle'.

From this point on in the guide, it is assumed you have Netbeans installed.

A library is a set of functions that are available for use. However, they must be properly linked in before you can make use of them in your code. It's usually a good idea to keep one copy of each library in a common folder (ex. "C:/My Java Libraries/"). This way, if any libraries are updated, you can replace them in this one common folder, and it will affect all your Netbeans projects.

In the SkyProc distribution, you will see a "Libraries" folder that contains:

The first step is to drag all of these folders into your common java library folder (ex. "C:/My Java Libraries/"). Anytime you get a SkyProc update, you do this step and replace the old libraries with the updated ones.

How Libraries should look after adding skyproc and its dependencies

Add a new library and name it "skyproc". Then, under the Classpath tab, add skyproc.jar

Add a new library and name it "lev" Then, under the Classpath tab, add lev.jar

Your screen should now look like the picture to the right. Click OK, and SkyProc should be successfully linked into Netbeans. Anytime you want to link to SkyProc, Netbeans will know where to look.

Link to Your ProjectEdit

If you create a new project from scratch and want to link to skyproc, just right click the "Libraries" node in the Project Pane on the left, select "Add Library", and select the "skyproc" and "lev" libraries you just created. However, if you are just starting, it is suggested you use the SkyProc starter project provided in the distribution. It comes with the SUM standard already set up, which includes the default UI and other skyproc standard specifications. 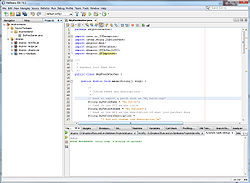 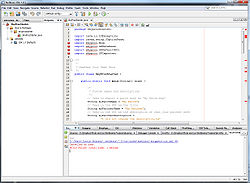 If you see red like this, you must set up your skyproc library links as instructed above

The starter project does everything needed to make a SkyProc patch except the custom preferences and custom code to make the changes to your patch.

Things you need to be aware of to tweak/change:

How the final GUI will look

An empty patch isn't much use. Let's pretend for the sake of this tutorial that your end goal is to add the "Fireball" spell to every NPC in the game. It's a joke mod, right?

Give it a NameEdit

First, make sure to change the custom names and definitions. Now your custom strings look like this:

This will make your final patch named "Fireball Apocalypse.esp", and adjust the title and description on the GUI.

SkyProc can do almost anything the CK can do. You can think of it as an automated CK patch creator. All that you need to do is code in the same logic you would use if you were to create the patch by hand yourself. In short, the logic would go like this:

Easy logic; Extremely time consuming to do by hand in the CK.

The SkyProc starter program has set everything up so that you can start coding the logic right away. It's ready, it just needs to know what to do. So, here's what needs to be done to make Fireball Apocalypse come to fruition:

So, let's get started.

First, we need to tell SkyProc which records we're interested in importing. We want to modify and export all the NPCs. To tell SkyProc that, modify the importRequests array to look like:

After some UESP research, you find that the Fireball FormID is "0001c789"

So, we want to create a FormID object in our Java program with that ID. Here's that code:

Looking at the FormID constructor, you'll notice it has two parameters:

So, now you've created a FormID with the Fireball id, and originating from Skyrim.esm.

First, we have to get the whole list of NPCs. The SkyProc starter project hands you a Mod object named "merger" that already has all the records from a user's entire load order in it (flattened to only have the last override of each record). This temporary merger Mod object has all the records SkyProc imported, and is your go-to place to get existing records. So, to get all the NPCs in a user's load order, you simply call:

Well, just getting all the NPCs doesn't do much good; We want to iterate through them. For this, we are going to use a "For" loop. It's a common looping keyword used in almost every coding language.

The previous code in words is saying: "Get me the GRUP of NPCs in merger, and for every NPC_ n in that GRUP, I'm going to do ..."

What do you want to do? Add the spell fireball to the NPCs:

One last thing we need to do is add the modified NPCs to the patch Mod object so that they are exported.

And DONE! Running this program will now iterate through all the NPCs in a user's entire load order (no matter what mods they have), and add Fireball to them, and export the modiified NPC records to a patch. FIREBALL APOCALYPSE!

Notes and FAQ about what we just didEdit

An important note is that you DON'T want to put any exporting code after what we just wrote. Exporting is handled by the starter project.

And finally, one question you may have been asking yourself is why we didn't import Spell records, as we were dealing with the Fireball spell, no? The answer is that we didn't actually access or use any spell records. We knew the Fireball formID already, and just added its formID to the NPC's record. We didn't actually check anything inside the fireball spell, or modify it in any way, so we don't have to import it.

Bundling the Program for DistributionEdit

The standard compiling setup built into Netbeans compiles your code into a .jar file (ex "Fireball Apocalypse.jar", but then also puts a lib/ folder with skyproc.jar and lev.jar. This folder has to be present alongside your .jar, or the program won't run properly.

All these extra files are messy, and cause issues when someone uses an older version of skyproc, and overwrite the /lib folder with their older copies. Now someone else's program using a newer skyproc.jar doesn't function anymore.

That is not the way to properly distribute a SkyProc program.

The correct way to do this is using the custom compiler code included in the SkyProc starter project. This custom code bundles all the .jar files necessary together into one file: "Fireball Apocalypse.jar".

This single jar is then self-sufficient, and doesn't need an accompanying /lib folder. It also doesn't screw up other SkyProc programs.

To use this custom compiling code included in the starter project, follow these initializing steps:

After you've done the initializing steps, anytime you want to make a new .jar file to upload (your first time, or just an update), do the following:

The .jar file will be created in the store/ folder in your project folder.

If you are using the SkyProc starter project, then there are certain specifications your file structure must meet in order to work. By default, your patcher .jar file MUST be in

'If it is not in this location, it will not properly locate mods to import, nor will it export the patch to the data folder.

Before you pass out your newly created SkyProc program, you should do some tests to confirm it's working as intended. SkyProc and Java are powerful tools, and as we all know, "with power comes responsibility". With a more complex SkyProc program lots of things can go wrong, and even one line can throw a wrench in the system so that it either doesn't function, or does something completely unintended.

Once you have prepped your program for distribution, try it out on your own load order, and confirm the results work. Load the patch in the CK/SkyEdit/Tessnip and see if they load it okay. Open Skyrim and see if it crashes. Run around and see if you have mudcrabs shooting fireballs properly.

Once everything seems functional, then upload it.

Be prepared to get bug reports from users, as this comes with the territory. SkyProc is not hard-coded, and adapts to the user's load order. You may have not foreseen some circumstances, which could throw off some of your calculations or conditional statements. Keep improving, keep adapting!