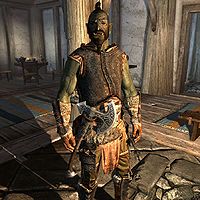 A male Orc in The Bannered Mare Inn

The adventurer wears a complete set of heavy armor, including cuirass, boots, gauntlets, shield, and has a 50% chance of wearing a helmet, all items leveled to the best possible quality. They either wield a leveled mace, sword, or war axe. They also carry leveled potions of healing and of stamina, along with a random ingot, some ore, and a small amount of gold.

When you approach the adventurer, they will condescendingly say: "What's a milk drinker like you doing out here? Go home to your mother." You can concede by telling them you're sorry and that you'll be leaving, after which they will arrogantly respond: "That's right", ending the conversation. If instead you tell them they shouldn't talk to you like that, they will just bully you further: "Why? What are you gonna do, cry?" At this point you can persuade them into letting you go, or intimidate them to stop, both depending on your Speech skill - failure will cause them to turn hostile and attack you. If you try to intimidate them into backing off, success will render them scared: "No need to get rough!", while failure will anger them and turn them hostile: "I don't have to take that from you". Should you attempt to persuade them, stating that you don't want any trouble, success causes them to be merciful: "Who said anything about trouble? Now get out of my face.", while failure makes them utter an exasperated: "Gods, you are boring!". Should you at any point leave the conversation, they'll be annoyed: "Get out of my face."