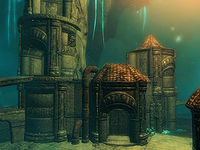 The Debate Hall is a small Dwarven ruin within Blackreach containing Falmer and their servants. It is part of the Dwemer City located in the western part of Blackreach. 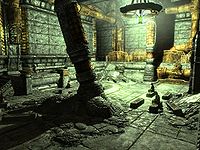 The interior of the Debate Hall

The path leading up to the Dwemer city from the west is unguarded, however once you approach the walls things change, with both Falmer and Falmer servants actively patrolling both the walls and grounds. The walls of the city provide an excellent vantage point to snipe various Falmer and their servants that can be found both on the walls and patrolling the grounds. The Debate Hall is in the southern part of the city, with three entrances from the grounds and a fourth from the Pumping Station. As you pass under the arch at the top of the ramp, there is a wide flight of stairs in front of you; the Debate Hall is to the left. There are three entrances from the ground level of the city. The first entrance is near the top of the ramp up into the city and has a flight of stairs leading up to it, on the east side of the building. The second entrance is around on the north side of the building and is from a large brightly lit courtyard. The last ground level entrance is at the southwest corner of the building next to a crimson nirnroot that may be protected by a chaurus cocoonDG (see notes) to the right of it, under a large horizontal metal pipe.

Entering from the Pumping Station brings you in at the top of a spiral stone staircase, bottoming out at a raised walkway heading west, guarded by a Falmer magic user that patrols back and forth. To the south is a second walkway, with an open metal gate to an alcove containing a skeleton that is reaching out towards a copy of the Speech skill book A Dance in Fire, v6. Beyond this is a long flight of stairs leading down to the ground level.

Heading down the stairs will lead you to large, brightly lit room with a high ceiling and three Falmer servants sitting on some west facing stone benches. Ancient Dwarven machinery can be heard whirling away below you at the northern end of the room and in the southeast and southwest corners of the room, all protected by metal gratings. There is a fourth servant wandering across the raised walkway along the west wall. The stairs to the west lead to a door facing north that leads out into the middle of a large brightly lit courtyard on the north side of the building. The second door on the ground level is underneath a covered, darkened area to the east. This door leads outside near the ramp up to the city. The final door is up a flight of stairs to the south and exits to the right of the crimson nirnroot.