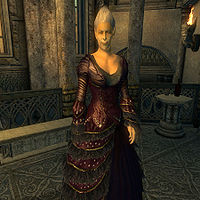 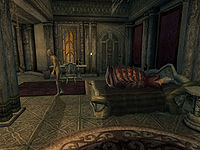 Muurine is a High Elf mage living with her Uncle Leo in Crucible, New Sheoth. She is manically obsessed with conspiracies and tries hard to find a pattern in everything. She shares her wild theories with Uncle Leo, who happens to be a zombie living on the second floor of her house. Incidentally, she herself is part of a major conspiracy in and around Crucible, and you will have to sort things out during the quest The Lady of Paranoia.

When not strolling around town asking her fellow townsfolk to share their secrets, she can be found in her big mansion in the center of Crucible. She sleeps in her bedroom on the second floor every night between midnight and 7am, before starting the day with three hours of wandering on the ground floor. At 10am she leaves for the Sacellum Arden-Sul, where she will pray silently for the next two hours. Between midday and 5pm she will be found nervously pacing around her house, before heading down to Sickly Bernice's Taphouse for a three-hour dinner. At 8pm, she makes her way up to the rooftop above Bernice's and meets up with the other members of the duelists for two hours of drinking and fighting. On Tirdas, she will fight Caldana Monrius, on Middas Ma'zaddha, while on Fredas, she will fight Caldana, Ushnar gro-Shadborgob and Cutter. On all other days, she will just stand near the sideline, cheering and drinking. Once she gets back home, she spends the next two hours till her bedtime strolling around the ground floor.

She wears the atypical and prestigious red finery and carries the special duelist's key along with her own house key and the Liturgy of the Duelists. She also possesses a bottle of ale, which she drinks at meals. Although she is quite wealthy, she is one of the few NPCs without any gold in her inventory. During her evening duels, she will be equipped with a club. At all other times, she will simply rely on her fists in combat.

When you get near her, she will turn around and ask: "What's the latest news?" When you talk her for the first time, she will instantly try to squeeze some gossip out of you: "I'm Muurine. If you have any secrets, I'm the one to tell. I won't share them with anyone but my family. Unless they're good ones, that is." Her "family" seems to be the walking zombie in her bedroom, and on subsequent meetings, she will say: "Hello there. I just finished a lovely conversation with Uncle Leo; it seems he's not feeling well today. Lost an arm." When she exits conversation, she will add: "If you hear anything interesting, let me know." 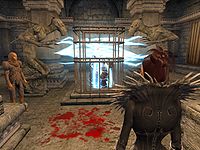 During The Lady of Paranoia you will find out she is the mastermind behind the plot against Syl. Under torture, Nelrene will confess: "I'm not even the one you want. Muurine is behind it. You'll need solid proof to pin it on her." When Herdir zaps her again, she will add: "Argh... Very well. I am part of the group that wishes to see Syl drowned in a pool of her own blood. But I am not in charge. You want the leader. You want Muurine. But no amount of torture will get a confession from her. You'll need more than just my confession. You'll need evidence, and I have none." Once you confront Muurine however, she will freely give herself up: "I see you've done quite a bit of work to track me down. Yes, I orchestrated it. Syl deserves to die a painful death for turning on all of us, and consorting with our enemies. Go ahead, do what you will. Nothing matters now." And she will pity you: "Haven't you got what you need? Shouldn't you be running off to tattle like a good little servant?" When you tell Lady Syl about Muurine's confession, the paranoid Duchess will say: "Is that so? I shall have her brought to the torture chamber at once. Meet me there shortly." Muurine will then relocate to the torture chamber in the House of Dementia for a final showdown with Lady Syl. If you approach her then she will make one last threat: "You've chosen a side, little one. You'll get what's coming to you eventually." Finally, Syl will shout out "You've confessed to attempting to kill me, I understand. The penalty for this treachery is death, and is to be carried out immediately." and execute Muurine without further warning.

At different stages in the Main Quest, Muurine will share different rumors with you and other NPCs:

The Construction Set also lists the following rumors, although Muurine will never get a chance to use them: