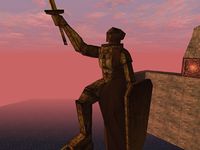 The Statue of Hunding is a monument just west of Stros M'Kai's harbor. It is dedicated to the legendary hero, Frandar Hunding, who drove the goblins of Hammerfell back into the earth. The statue depicts Hunding armed with a sword and shield resting his foot on a goblin's head. According to Trithik, the statue's presence keeps the goblins underground, which may explain why Richton has not destroyed it.

You can get to the top of the statue from the city walls behind it. There is a hidden room on this side that contains the Talisman of Hunding. The talisman has only one known purpose, which is to open a crack in the wall at Point O of the Goblin Caverns. This reveals a secret area with a brazier; holding your blade in the fire grants you a superior strength effect. 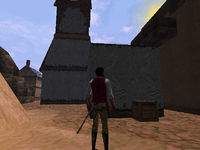 Use the crate to climb on the roof 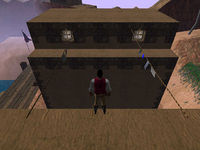 Cross the clothesline to the next warehouse 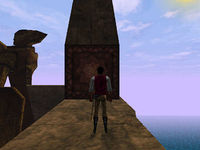 The city walls lead to the back of the statue

Point A — Down by the Docks
The path that leads to the city walls starts behind the small house northeast of Kotaro. Climb on the crate to reach the roof of the building, then jump to the ledge extending off the first warehouse.

Point B — The Warehouses
Two clotheslines connect this warehouse to the second one. The gap is too wide to jump across and you cannot hang from the clothesline. Instead, you must walk over the line as if it were tightrope. It's best to line yourself up exactly and just run across. It appears that Cyrus has trouble stepping over the clothespins, and you may get stuck while crossing. If that happens just carefully jump and you should bypass the obstacle. Once on the other warehouse roof make a running jump onto the city walls.

Point C — The City Walls
Continue south along the wall, keeping to the right as you pass above the city gate. The ledge near the tower at C cannot be walked on because it is too narrow. The only way around is to hang off of the edge and move sideways until you reach the other side. Enter the statue's hidden room and pick up the Talisman of Hunding. Falling into the water causes no damage, making this the easiest method of getting down from the statue. You can also backtrack north, either to the warehouses or further north to the bridge above the waterfall. 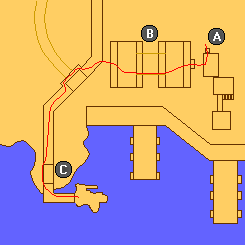