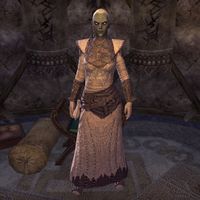 Wise Woman Asani is a Dark Elf who can be found in Ald'ruhn.

After placing the items at the shrines, she'll ask:

I'm looking for the Hleran Ancestral Tomb. Do you know anything about it?
"I do not know this name, Hleran, but there is an ancestral tomb nearby. It hides among the rocks to the west, beyond the fire-river we call Drura.
I would not go there, outsider. Tombs are like guars—left untended they grow wild and feral."
Have you been inside?
"No, but I have heard their cries. The spirits that dwell there sound anguished. They have a story to tell, I think. They long to be remembered.
I am sorry, but I have no ear for their tales. My basket is already full of the Ashlanders' troubles."
"I wish you good fortune if you enter the tomb. I have no doubt that you will need it."

Recover Calderas from the Hleran Ancestral Tomb and return to the center of the camp. After Drelyth thanks you, he turns to the gathered Ashlander leaders:

Asani will walk off without saying anther word, and will indefinitely pace around the camp.