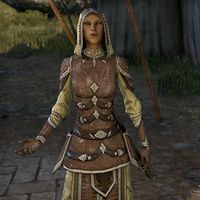 Taralin is an Altmer who can be found at the siege range at the Eastern Elsweyr Gate.

Zan will ask you to report to Taralin after you have practiced repairing siege weaponry. Speaking to her before completing your task:

"Come see me when you are done with the siege weapons, warrior."

Afterwards, Taralin will talk to you about Forward Camps. Note, the following dialogue appears to be deprecated:

"Greetings, soldier. You see beside me one of our army's forward camps. Placing these near a battle site will speed our warriors into the fight, often tipping the balance between victory and defeat."
How do I get one?
"Grand Warlord Sorcalin has decreed that every new recruit receive a limited version of our forward camps. Full versions can be obtained from siege merchants.
But now, others need to speak with you."
needs dialogue from more recent version

Continuing to talk with her, she will send to you to the Temple of Mnem to learn about the Elder Scrolls.

"At the Elder Scroll temple of Mnem, Protector Arfire waits. She has much to tell you."
I'll go speak with her.

"You are always welcome here, warrior."

This Elder Scrolls Online-related article is a stub. You can help by expanding it.
Retrieved from "https://en.uesp.net/w/index.php?title=Online:Taralin&oldid=2341835"
Last edited on 8 February 2021, at 22:14