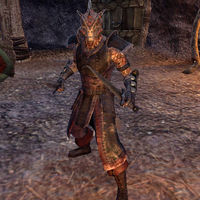 Seeks-the-Night is an Argonian and the brother of Leel-Vata, the spiritual leader of the Silent Mire. After Vara-Zeen, his sister's mate, was chosen over him as their elder, Seeks-the-Night was identified by Naryu Virian as a potential agent of chaos for a group of war profiteers led by a former Eye of the Queen. He would go on to betray his own kin and stole sacred relics for the purpose of giving them to the Renrijra Maor, weakening the settlement in the process. 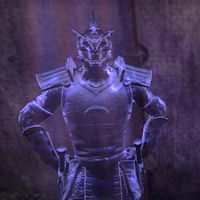 The Shadow of Seeks-the-Night appears throughout the related quests, taunting you.

Seeks-the-Night first appears as a projection of himself, Shadow of Seeks-the-Night, when he is berating Leel-Vata in the middle of the village.

The Shadow dissipates, and you will need to speak with Leel-Vata.

The Saving of Silent MireEdit

The Shadow of Seeks-the-Night will appear when you find the key to the chains binding the Argonian captives in the Khajiiti pirate camp. You will have the option of speaking with him.

You must be Seeks-the-Night.
"And you're an outsider fumbling around in events you don't understand.
Leave this place before you do something you'll regret."

The Shadow will appear again after you free the captives.

Shadow of Seeks-the-Night: "You persist in annoying me. You are as irritating as a marsh fly."

"Why try to mend what is already broken beyond repair?"
Show yourself and we can settle this.
"You've spent too much time with miserable Dark Elves and stupid Nords. I'll not be baited by your taunts.
I'm long gone from this place, fool. You're speaking to an echo. You cannot harm me any more than you can hurt your own shadow."
I'll find a way to stop you.
"And I will enjoy watching you fumble and fail!
Go back to my sister and tell her of her thin-scaled mate's failure. Vara-Zeen was never worthy to lead the village. He couldn't stop me and he was never worthy of my sister!"
We'll see.

You use the magic of the Hist branch on Seeks-the-Night's hut to bring him there.

Seeks-the-Night: "No! The Hist calls to me. Pulls me back!"

You will then need to fight him.