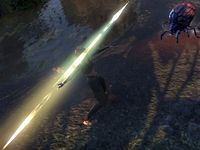 Piercing Javelin deals Magic Damage to an enemy and knocks them backward, stunning them for a brief moment. Aurora Javelin increases the damage when the ability is used at a distance, while Binding Javelin converts it to a Stamina-based image, and increases the duration of the stun caused by the attack.