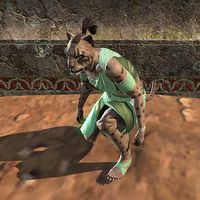 Nurra is a Khajiit found in Merryvale Farms. Her farm and family are under attack by a strange beast. She has two sisters, Pashroni and Banji, and her father, J'dathal.

You'll find her near the western windmill:

"By the Moons, you have to help me! A monster attacked our farm. My father ran, but I do not know what became of him."
Your father is safe farther down the hill. I cleared the path. You should go to him.
"Thank goodness.
Have you seen my two sisters as well? We separated in our panic, and I fear for their safety."

I'm still looking for them.
"Then you must hurry. I will try to make my way back to father, now that you've cleared the path to him."
All right.

If you have found one, but not both other sisters, you can say:

I found one of them.
"I'm happy to hear that, but I'm still worried about my remaining sister. Please, could you find her? Preferably before that monster does."
I will.

If she's the last sister you've rescued, she'll tell you where to find the monster.

Yes. They're both safe.
"Moons be praised. I feared the worst, what with that monster stomping about. My sisters may be swift runners, but warriors they are not."
Can you tell me anything more about the monster that attacked you?
"I was not able to catch a glimpse of the beast, but I remember its stench. Brimstone, cold smoke. Most unnatural.
I can still catch the scent, coming from the cave up the hill. It may still be there."
Thank you.

Just then, the dashing Razum-dar appears:

Nurra: "Raz? You're here?"
Razum-dar: "Of course! You are safe now, sweet Nurra. Raz will get you to safety."
Nurra: "The two of us behind the mill. Reminds me of old times. Old promises."
Razum-dar: "Eh, let's talk about that later. Much later."

If you speak to her before leaving, she'll tell you:

"Please, do not worry about me. I am a very fast runner."

Defeat the monster and J'dathal and his daughters will appear in the cave with you and Razum-dar:

J'dathal : "There they are!"
J'dathal : "Moons be praised, thank you both! Because of your help, this one's family is safe."
Razum-dar : "Raz is so pleased to see you and your daughters unharmed. All … three of your daughters."

Under his fur, Raz seems to go white as a sheet:

Nurra: "Yes, Raz. And all three of us have been talking quite a bit about you."
Banji: "Specifically how you seemed to have made certain promises. To all of us."
Pashroni: "Do you remember, Razum-dar? "Oh, this one will love you forever. This one will come back for you soon. This one only has eyes for you!""
J'dathal: "What? Raz, is … is this true?"
Razum-dar: "Now, now. Raz can explain everything."

Out of respect, you leave Razum-dar to his own defenses. If you talk with her before you leave, she will diss Razum-dar's hairstyle.

"I don't know what I ever saw in Raz. I mean, just look at his stupid hair! I can't believe he kept it that way."