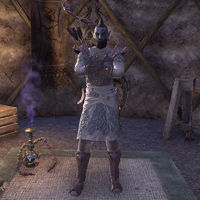 Huntmaster Sorim-Nakar is a Dark Elf of the Erabenimsun Tribe who can be found in his yurt in Ald'ruhn. He appears after completion of the quest Ancestral Ties and Ashlander Relations.

When you speak to him about starting a quest, he'll say any of the following:

"Still as eager as ever to return to the hunt? Hm! Good! I have just the beast to challenge you with."
"The outlander returns. This land hasn't broken you yet? Good.
Ready for another hunt?"
"I knew it. The hunt is in your blood!
Very well, outlander. Are you ready for a new quarry?"
"The thrill has taken hold of your spirit, hasn't it, my friend? Very well. Let's get you something new to hunt."
I'm interested in a hunt.

While a quest is in progress, he'll say:

"Now comes the hard part, outlander. The hunt. The dance. The kill.
Survival isn't proof of success, however. I demand a trophy, taken from the dead beast's body."
"Hunt and kill your prey, then bring me a trophy to prove that the deed was done."
"Track down the beast and slay it, but bring me something to show that the creature has been dispatched."
"I envy you, outlander. About to partake in another hunt. May your ancestors guide your hand!
Remember to bring back a trophy to prove that your kill was true and clean."

Returning to him after completing the task, he'll say:

After completing a quest, but before the daily timer resets, he'll tell you one of the following: 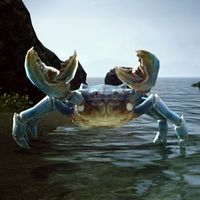 "A giant mudcrab was recently spotted along the southeast coast, near the Shrine of Azura. Large females rarely show themselves, but when they do the Erabenimsun strike.
Quite a prize, if you can kill it. They're deadly—but also quite delicious."
Anything else I should know before I hunt a giant mudcrab?
"We call such creatures Mother Jagged-Claw, a name awarded to the largest, most aggressive matriarch to crawl from the churning sea.
If you want to attract the mother mudcrab's attention, disturb the mud piles where she lays her eggs."
I'll hunt down Mother Jagged-Claw.

"Excellent! The tribe will eat well tonight and praise your hunting prowess with every delicious morsel.
Such effort does not go unrewarded. Take this, with our compliments." 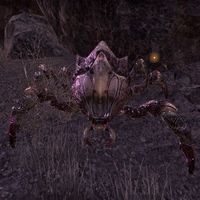 "My scouts report that the terrible creature we call Ash-Eater stalks the nearby ashfalls. Ash-Eater and its ilk are extremely rare, a deadly variation of the typical shalk. They burrow beneath the ash and wait for prey to wander by."
Where was this creature spotted?
"East of our village, hiding among the mounds of ash. If you disturb the mounds, you should draw it out—provided it doesn't ambush you first.
Once the dire ash beetle appears, your skill will determine the outcome of the encounter."
I'll hunt down Ash-Eater.

After greeting you on your return, he'll say:

"It's unusual for an outsider to seek to honor our customs and follow our traditions. Continue on this path and never show weakness, and you will always be welcome among the Erabenimsun.
Accept this as a token of our mutual respect." 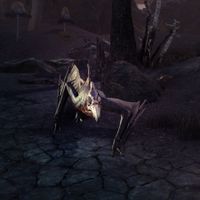 "An ancient cliff strider that we call Old Stomper preys upon our people near our camp to the southeast. The older these creatures get, the more crazed and dangerous they become. With most of our hunters engaged elsewhere, the camp remains at risk."
How do I find this ancient cliff strider?
"Head toward the camp near Nchuleftingth and search for signs of Old Stomper's attacks. A good tracker can follow the blood trail back to the creature's nest.
Just be wary. Old Stomper has survived these many seasons by being ferocious and cruel."
I'll hunt down Old Stomper.

Return to him with news of your kill and he'll say:

"Old Stomper falls and my people rejoice. Most impressive, hunter. You show your respect for our tribe and this land with every hunt you complete. Perhaps you have Ashlander blood flowing through you, after all.
Take this with our thanks." 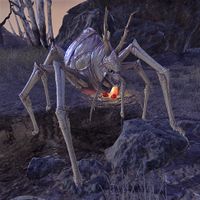 "Do you know the mighty nix-ox? A noble creature, but occasionally one so large and ill-mannered appears and gives us no choice but to slay it. We call such a monster Great Zexxin, a title that passes to the largest, most dangerous nix-ox in the land."
Where can I find Great Zexxin?
"Great Zexxin has been spotted to the northeast of the Erabenimsun camp near Nchuleftingth. Nix-ox and other creatures gather near the yellow rocks and pools in the area. Search for signs of Great Zexxin's passing and follow the tracks to your quarry."
I'll take on this hunt.

"An impressive trophy from a worthy hunt! I'm beginning to forget you're an outlander.
Allow me to honor you, in turn, with this humble reward." 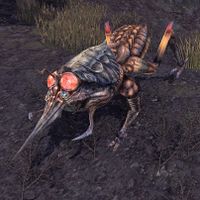 "The tribe's supply of nix-hound parts is depleted, but my hunters have encountered a problem. A deadly nix-hound, larger than the rest, preys upon them in return. We've yet to bring it down.
Let's see how you fare against the beast."
What else can you tell me about this deadly nix-hound?
"We call it Tarra-Suj, which means "powerful hunter" in my people's language. Our camp near Nchuleftingth suffers as the creature becomes ever more bold.
Kill common nix-hounds and Tarra-Suj will appear. Try to fare better than my hunters, outlander."
I'll hunt down Tarra-Suj.

"You follow the path and honor the hunt. Continue this course and you'll always find a place at our fires, outlander.
For now, take this as a token of our mutual respect." 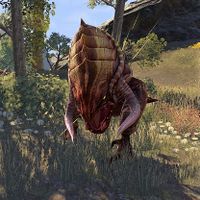 "Our hunters must prove themselves by killing a kagouti pack leader. We call these rare and powerful beasts King Razor-Tusk. Due to the importance of this tradition, novice and veteran hunters alike track them to rekindle the spirit of the hunt."
Do you have any leads on where to find a King Razor-Tusk?
"We recently tracked the kagouti pack east, to the other side of Red Mountain. Pick off the members of its pack and eventually King Razor-Tusk will show its fearsome visage.
Just be wary, for the smell of blood will drive it into a frenzy."
I'll hunt down King Razor-Tusk.

"A King Razor-Tusk trophy serves as a great talisman for hunters about to set off into the wild. Our crafters will make good use of this specimen.
And for you, this gift. As is our custom when a hunter successfully returns to camp." 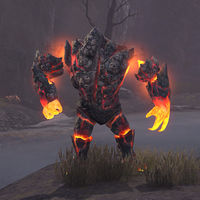