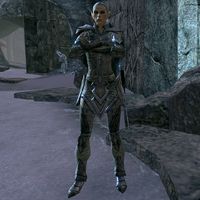 General Endare is the Altmer commander of the Jade Dragoons, an elite unit of the Aldmeri Dominion that became infamous for the so-called massacre at Cormount, which resulted in the destruction of most of the Blacksap Rebellion and the city seized. She is known as the Jade General or, more commonly by those who regard the actions at Cormount as unjustifiable, the Jade Butcher.

Having pulled her Jade Dragoons out of the city, she is indirectly responsible for the Jackdaw Pirate invasion of the coastal city of Haven. She also commanded Lieutenant Urien and a handful of Dragoons to oversee the Mages Guild excavations at the Ossuary of Telacar, where they pressed the acolytes there to ignore guild rules and regulations which resulted in hostile shades swarming the site.

During A Lasting Winter, you encounter General Endare at Tarlain Heights, where she searches for Rajhin's Mantle. She has used the Falinesti Faithful as a slave force to uncover the Mantle, and her successful hunt has driven her insane.

You encounter Endare in Nairume's Vault at the Falinesti Winter Site, where you'll hear her yell "You'll never take it from me!"

Speaking to her will reveal the cause of her consternation:

"Who are you? And why are you dragging that frost witch behind you?
Out with it."
I'm here for Rajhin's Mantle.
"You? I'm a decorated general of the Aldmeri Dominion, a hero to my people. Who better qualified to wield the power of a god?"

If you've started Fit to Rule, you can say:

Queen Ayrenn needs it for her ratification ceremony.
"But … I found Rajhin's Mantle. Why should Queen Ayrenn be the one to wear it? I've been fighting since before she was born!"

If not, you can only ask:

So you retrieved Rajhin's Mantle for the Dominion?
"For the Dominion... for its armies. For those with the strength to lead us against our foes."

Either way, you have two choices:

[Intimidate] Rajhin's Mantle is controlling you. You're a Dominion general - snap out of it!

"I... you're right. We were overrun. I thought to use its power to slay our foes, but I couldn't stop. I killed my own soldiers!
I can feel it, bringing my shadow to life. You must stop me, no matter the cost!"
All right. I'll do as you ask.

Both choices will lead to her saying:

"No! You're trying to trick me. Trick the trickster god... ha!
I can see right through your lies. I won't give it to you, or anyone! You'll fall to Rajhin's Shadow!"

Endare will then become hostile, and she will use Rajhin's Mantle to spawn her shadow. During the battle, she'll yell:

If you fail to kill both her and her shadow in quick succession, then the survivor will simply create another shadow. You will have to kill her in order to take Rajhin's Mantle from her and progress through the quest.