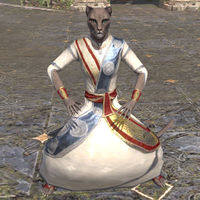 Elementalist Students are Khajiit apprentices under the tutelage of the exiled adept Ri'Atahrashi found at his training ground. They are hostile and will attack anyone who interrupts their training.

Flash Trail
A leaping attack, the Elementalist Student jumps to their target, leaving a trail of fire behind them.
Flash Surge
A conal ability, used when their target is in melee range and the ability is not on cooldown. Causes fire damage.
Flame Aura
The student applies a large orange circle around themselves and any nearby allies, they will gain following buffs:

Standing within the circle as enemy of caster will cause fire damage and may apply the Burning effect. The ability can be waited out or interrupted with stuns or knockbacks. Attacking the shield to break it is a more risky option.

This Elder Scrolls Online-related article is a stub. You can help by expanding it.
Retrieved from "https://en.uesp.net/w/index.php?title=Online:Elementalist_Student&oldid=2141439"
Last edited on 25 April 2020, at 05:38