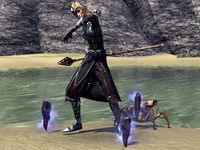 Dark Exchange allows you to sacrifice Stamina to restore Health and Magicka. The Dark Deal morph switches this to sacrificing Magicka in favor of Health and Stamina, while Dark Conversion reduces the Stamina cost.

This Elder Scrolls Online-related article is a stub. You can help by expanding it.
Retrieved from "https://en.uesp.net/w/index.php?title=Online:Dark_Exchange&oldid=2680520"