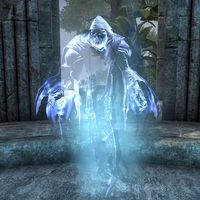 Calion was the son of Telacar and Vastarie, two Altmer mages who defected from the Worm Cult. His ghost can be found at the Ossuary of Telacar, where he is initially met as the Pale Sentinel. He died at a young age many years ago, which prompted his father to seek a form of immortality for him through necromancy. His remains were fashioned into a Flesh Atronach called Calion's Husk.

As you look for the sentinel in the ruins, you'll hear:'

Pale Sentinel: "Leave this place! I won't let you wake him!"

Defeat a Possessed Soldier and he'll leave the body:

Pale Sentinel: "The bone scepter? No! Please, don't wake him!"

You first meet him as the Pale Sentinel after Andewen sends you to test the bone scepter.

"Stop! Don't make me go back. I was so close to escaping him forever!"
Escaping from who?
"Telacar. A bad man, who sleeps inside these ruins. When he wakes, I'll be trapped here forever. I'll do everything I can to get away!"
Is that why you attacked the Mages Guild acolytes?
"I did not! Telacar's servants hurt those people. They don't like you if you aren't from here. When he wakes, he'll control them completely. Just like me."
Why should I trust you?
"The bone scepter holds power over Telacar's monsters. Over me. I can't lie to you. Besides, lying is wrong."
Who are you?
"One of Telacar's victims. But I don't have to be. If you can free me before he wakes, I'll leave. Then he'll go back to sleep, forever!"

Then I'll do what I can to set you free.
"Hooray! Follow me inside the ruin. We don't want the shades to hear us. They're his spies, you know."

I'm not sure I should help you.
"I understand. I'm a monster. Nobody listens to monsters. But … if Telacar wakes, he might do bad things to people who live in the forest. I don't want that to happen, not because of me. I want him to go back to sleep."

Then I'll do what I can to set you free.
"Hooray! Follow me inside the ruin. We don't want the shades to hear us. They're his spies, you know."

I'll keep him from waking, but that's all.

"Oh, all right. We should go inside the ruin so his shades can't hear us. I guess."
All right, I'll follow you inside. But no tricks.

Once you have entered the ruins, you can talk to Calion some more.

"Shhh … be quiet in here. Telacar's servants don't like things with blood inside them. And they really don't like noise."
How can we keep Telacar from waking?
"There's a big sparkly door inside the Constellation Room. It's this big lock Vastarie made, to keep him asleep inside. She doesn't come around anymore. I think that's why the door isn't so sparkly."

If you have not done Vastarie's quest:

Who is Vastarie?
"Telacar's wife. They fought and fought, because he was a bad man and she was a good woman. But she thought she could change him. When she realized he'd always been bad, she locked him in here. But the lock grew weak, and now he's waking."

If you have done Vastarie's quest:

I've met Vastarie.
"You did? That's wonderful! Is she doing all right? Did she mention me? Where is she now?"
The last I saw her, she was in her tower.
"Oh. Nearby, huh? Maybe I can visit. You know, when I'm free. After we make her lock stronger, so Telacar sleeps forever."

Either way you can ask:

How do we reinforce the lock?
"Vastarie left three of the things we need in special rooms around the ruins. The fourth is stuck inside some of Telacar's servants. If you smash them open, I won't tell. But about all the pieces … I don't know how to make them work together. I'm sorry."
Where are these special rooms?
"That's easy. The Moaning Room, the Smelly Room, and … the Forbidden Room! But don't worry, I can keep you safe. We should just go there. I'll point out what we need."

How can you keep me safe?

"I can distract Telacar's servants. Point the bone scepter at one of them and I'll blind it. Then you can smack it until it falls down. Don't worry, it's not like you're hurting it. They get back up again, eventually."

I want to know what I'm looking for.
"Oh, all right.
The most important thing is the book Vastarie wrote in when she locked the door. We need to find that so we know what to do in the Constellation Room."

What else do we need?
"There's an old skull Telacar stole from Mannimarco. Then there's a glowy vial. I don't know what's inside, but if you listen real close you can hear whispers.
Oh, and the milky rocks. You'll find those inside some of Telacar's servants."

If you talk to him again before getting the required items, he'll say, "Once we find all the pieces we need, we can go to the Constellation Room. Then we'll make sure Telacar sleeps for good!"

As you look for the items, he'll make comments on each area:

Pale Sentinel: "Behold … the Forbidden Room! I come here to think sometimes. It's where Vastarie left the book she wrote in when she put Telacar to sleep."

Pale Sentinel: "It's the Smelly Room. That glowy vial lit the hallways when Vastarie carried it back from the Constellation Room."

Pale Sentinel: "I don't like the Moaning Room. All the servants used to live in the cages. But Vastarie brought that old skull back here, I'm sure of it."

After you get all the items, he says, "You have everything Vastarie had when she made Telacar go to sleep. I don't remember how she did it. I'm sorry. But I know she used the altars in the Constellation Room."

Place the items on the correct altars.

Once you've spoken to Telacar, he'll phase through the door behind him taking the Pale Sentinel with him.

Pale Sentinel: "No, please! I don't want to stay here!"

Telacar will tell you the Pale Sentinel is the soul of his long-dead son Calion, whom he plans to 'revive' by binding him to a Flesh Atronach labeled as Calion's Husk.

Inside the throne room, if you speak to him before speaking to Telacar, he'll be in magical binds and only say:

Speak to Telacar. You will have to decide to aid him or Calion. If you talk to Calion, he pleads:

"No … please, you can't make me be a monster again!"
What do you want, Calion?
"I don't want to be here anymore. It hurt when I was a monster, it hurt worse than these chains. I want my father to sleep so I can go away."
How can I make your father sleep?
"I don't know. I wish you could use the bone scepter on him. Point it at his body, there on the throne, and tell him to go to sleep. Then I could finally leave."
Where would you go?
"Far away from here, somewhere safe and warm. Somewhere where I'd have friends."

If you have done Vastarie's quest:

Vastarie returned to Laeloria. You could go there.
"Do you think I could go there? Would she be happy to see me? Or would it be like the last time, when she thought I was a monster? I don't want to be a monster. Please, make my father go back to sleep, so I can be free."

If you bind Telacar, Calion will be overjoyed:

"You did it. You did it! I'm free. I'm finally free! Thank you, thank you!"
What will you do now?
"I don't know. But whatever it is, I'll be far away from here. Telacar can't hurt me anymore. Here, I can open a portal so you can be with your friends. Tell them I'm sorry about the shades. As long as they stay away, they should be fine."

This completes the quest. If you talk to him again before leaving, he says, "I wonder where I should go? What to see? What to do, who to meet? It's a little scary, now that I can do it. But I'll figure something out."