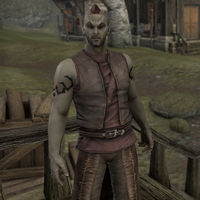 Almerel Dralen is a Dunmer who can be found in Cropsford. He is guarding his warehouse, and when you speak to him he explains that he does not think that his daughter, Madria, should marry Remius, a poor Breton.

If you speak with him, he will speak at length about how he hates the idea of a relationship between Madria and Remius.

"You'd better not be here to talk about Remius. I hear enough of him from my daughter, who needs to learn obedience. Remius - bah! He'll never have Madria."
Why not?
"First of all, he's a Breton. No self-respecting Dunmer would ever marry one of those people. But even if he were Dunmer, he is poor and will remain so. My daughter will not marry a lowly Breton farmer!"
Maybe Madria should marry whomever she wants?
"What fool idea is that? A daughter marries who her father tells her to, when he tells her to. Anything else invites chaos and the perils of interbreeding.
Your presence offends me. Go now."