The UESPWiki – Your source for The Elder Scrolls since 1995
< Oblivion: Places: Caves
Jump to: navigation, search 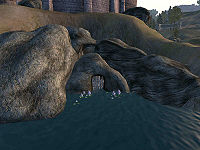 The discreet entrance to Smuggler's Cave

If the Thieves Den official download has been installed, an interior set of caves appears within Smuggler's Cave. These additional areas are all described at Dunbarrow Cove. In addition, a map marker is added for the cave with the label "Dunbarrow Cove". The following sections describe the zone of Smuggler's Cave that is accessible even if the download has not been installed.

There are two entrances to this cave, one from the ocean shore (Out), and one from inside Anvil Castle (C). The cave consists of a single small room, with three main areas containing various chests, crates and barrels with illegal merchandise. In the southeastern area you will find a bedroll (b), a boss chest (B) and a copy of Followers of the Gray Fox. In the small lower section of the cave is a Nirnroot (N).