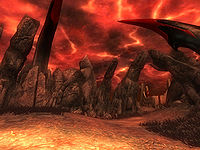 The A entrance is located at the eastern end of the southern island. To reach the main tower, you need to cross over to the other island. A random cave system takes you from the southwest corner of the island (near the base of a leaning tower) to the base of the main tower. The peripheral tower The Blood Well, that you will pass along the way, contains nothing of value. However, there's a relatively easy jump across lava to the main tower behind the Blood Well.

The B entrance is at the northeastern corner of the map. Getting to the main tower is just a matter of following the windy path across the island. You can optionally stop in The Reapers Sprawl tower as you pass it, to collect loot from two fleshy pods (both hanging from the ceiling). (The gate control at the top of the tower does not appear to actually open any gates). If you don't want to run the gauntlet of fire turrets, there's a relatively easy jump across lava to the main tower just under the bridge, south of The Reapers Sprawl.

There is relatively little loot in this world, so there is not much reason to explore the rest of it. If you came from the B entrance, you may want to enter the random cave system because there are typically several fleshy pods with loot. Note that you typically can not use the caves to go from the B to the A entrance, because there are generally places where you need to jump up a level. It is instead possible to cross the lava to get from island to the other; in several places the two islands are quite close to each other and only minimal damage is incurred. This can be taken advantage of to explore the cave system twice and get twice as much loot; see Random Oblivion Caves for information about this glitch (and a warning).

There is an odd bottle called "Blood Potion" behind a rock formation shaped like a reverse check mark to the east-southeast of the entrance to the Blood Well. It has no weight or value and appears to serve no purpose other than decoration for a home, as it has a unique red bottle in a daedric style. 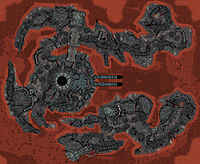 This Oblivion-related article is a stub. You can help by expanding it.
Retrieved from "https://en.uesp.net/w/index.php?title=Oblivion:Random_Oblivion_World_6&oldid=1836617"
Last edited on 27 August 2018, at 21:57