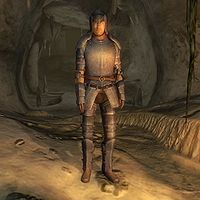 Elidor is a High Elf knight and Associate of the Fighters Guild. Along with his two colleagues, Rienna and Brag gro-Bharg, he has been sent to Desolate Mine to clear out the goblins that have prevented the miners from doing their jobs. As good as their intentions were, they're in desperate need of some weapons, and that's why Burz gro-Khash needs you to make a delivery as soon as possible. Elidor does not exist prior to the related quest.

You will find all three of them gathered around a lit campfire in the first large cave of Desolate Mine, never eating nor sleeping, eagerly awaiting the weapons shipment from the Guild. When you approach him for the first time, he will only point you towards team leader Rienna.

After her briefing, he will be a lot more talkative: "Ahh... you've brought the weapons. Let's talk about that weapons shipment you brought." He will also share his honest opinion on goblins: "Filthy animals. Some of my kinsmen are partial to them, but I find them reprehensible." When you present him with the weapons shipment, he will imply that his weapon of choice would be the steel longsword you're holding: "Excellent! I long to sink a blade into some goblin flesh." If you hand him the sword, he will be delighted: "A blade. Fantastic. Let us take the fight to these wild creatures." and "No more needed for me. I have this fine blade with which I'll slaughter some of these miserable beasts." If you, against his expectations, provide him with a steel warhammer, he will be more subdued: "Ah... a hammer. Well. Not my first choice, but it will suffice. Let's go!" and "I have a weapon now... this hammer. Not my usual weapon choice, but it will have to do. Let us slay these creatures."

After the slaying he will be more than satisfied with the results: "Well done, my friend. This mine is once again safe for the miners." As for the dead goblins, he will conclude: "It is good we've taken care of them, though they smell worse dead than alive." He will then remain within the mine indefinitely with his associates, if they are still alive.

Elidor wears an almost complete set of iron armor: boots, cuirass, gauntlets, greaves, and helmet. He carries whatever weapon you provided him with and a small amount of gold. He knows the standard knights spells from the school of Illusion.

If Elidor dies during the related quest, members of the Fighters Guild will mention him in dialogue: "Too bad about Elidor. The Guildmaster pays funeral expenses, doesn't she?"