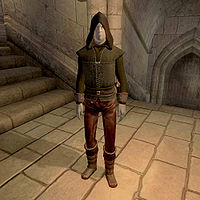 The Dark Minion is a vampiric Dunmer nightblade who moves into Deepscorn Hollow when the Deepscorn Dark Minion upgrade is purchased from Rowley Eardwulf.

The Dark Minion wears one of only four black hoods in the game, along with a dark shirt, a pair of laced leather pants, a pair of leather boots, and a leather bracer. In combat he relies entirely on a leveled dagger. As a vampire, the Dark Minion possesses all relevant abilities.

His room is off to the right of the underwater entrance to the hollow. He may be ordered to "murder in the name of Sithis", at which point he will leave the lair, returning two days later at midnight with random leveled loot. This loot can be found in the minion's room in a wooden chest. Details of his mission may be found on the Deepscorn Hollow page.

The minion himself is quite macabre, one of his pastimes being "painting" by using the blood of a corpse. He can be found wandering the halls or sleeping unless you've sent him on a mission. He can occasionally be seen raking the garden of venom growth if the player has purchased it. He sometimes practices boxing in his room. He also prays at the statue of Sithis in the back of the cave.

When you approach your Minion he will greet your approach by saying, "Sithis be with you, Brother/Sister." Speaking to the Minion will have him say: "At your service, Master." You may either ask him to kill in the name of Sithis or tell him that you have no need of him at the moment. Regardless of which dialogue option you choose, his reply is the same: "Yes, Master. Whatever you say." As you end a conversation with him he will say farewell with the line, "Walk always in the Shadow of Sithis."