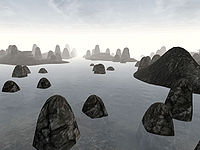 A typical scene in Zafirbel Bay

Zafirbel Bay is a large body of water on Azura's Coast. The region itself includes the islands and offshore area all along the eastern coast of Vvardenfell. Zafirbel Bay is located roughly in the center of the coast. Like most of the region, the islands tend to be covered with Muck Sponge, with Saltrice and Marshmerrow on the coasts. The waters teem with Slaughterfish and there is a thriving but disorganized pearl trade from the many kollop beds in the inter-island shallows. The ubiquitous cliff racers have rookeries on most of the high points of the islands.

There are about 35 islands in the area of the Bay, some little more than exposed rocks, some far more substantial. Some of the larger islands have crypts or caves, many have camps of itinerant fisherman or occasional bandits, and a handful have Telvanni wizard towers. The only really substantial island is the one on which Sadrith Mora is built.

The notable tower of Tel Aruhn provides a broad range of goods, but they are intended for serious magicians and may be difficult to get to for mundanes; again, you will generally be required to fly if only for a little while. Serious non-magical types in search of enchanted weaponry should bring several potions of rising force.