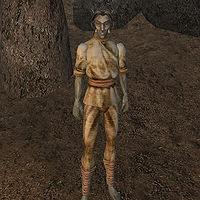 Vobend Dulfass is a Dunmer thief and Blackcap of the Thieves Guild, imprisoned in the Ministry of Truth for stealing from the pilgrims. He feels he was framed, as the pilgrims don't have much drakes to start with, but seeing as how the alternative was confrontation with the Ordinators, he is grudgingly doing his time, although with plenty of protests for his innocence. He is appalled by the attitude of the pilgrims, being disgusted at their willingness to forgo their material belongings to the Temple, calling them "sour, pinch-coin altar-lickers".