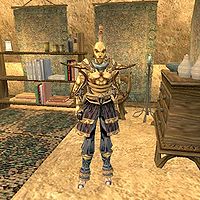 Suryn Athones is a Dunmer ordinator and Curate in the Tribunal Temple. He has his own little office in the Hall of Justice in Vivec.

He has some strong opinions about the Imperial Legion and refuses to back down. Because of this, Frald the White will order you to kill him during the related quest to stop him from spreading this slander.

Suryn wears an Indoril cuirass, helmet, pauldrons, gauntlets, and boots along with an expensive shirt and pants. He carries a gavel of the Ordinator. Aside from his natural resistance to fire and the sanctuary provided by his ancestors, he knows the spells Lightning Storm, Lightning Bolt, Shockbloom, Strength Leech, and Wearying Touch.

If you ask Suryn about his slandering, he will proceed to insult the Legion some more: "I spoke nothing but the truth. The Legion is just a mob of blunt-eared apes playing at being soldiers. Is it just your cowardice? Or the incompetence of your so-called Knights? Or is it just the way you smell?" His disposition toward you will then drop by 10.