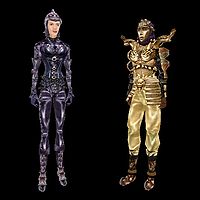 The Domina and Gold Armor introduced with the plugin

The plugin additionally includes female models for four previously existing armors which used male models on female characters: the Imperial Steel Cuirass, the Imperial Chain Cuirass, the Netch Leather Cuirass and the Steel Cuirass. Unfortunately, these female versions of the old armors were not successfully implemented by the plugin and so will not appear in the base game without additional modification. The oversight was officially corrected by Bethesda in the Tribunal expansion. There are also various third party mods that correct the error.

"LeFemm Armor, specially tailored for the ladies, is available for sale at the Fighters Guild in Vivec, from Sirollus Saccus in Ebonheart, the Redoran Vaults, and female smiths in Ald-ruhn, Sadrith Mora, and Ald Velothi." —Official Summary 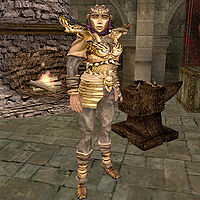 A bug causes one of the merchants, Sirollus Saccus, to wear the armor instead of offering it for sale

Domina Armor is sold by Manicky in Sadrith Mora, Dandera Selaro in Ald'ruhn, and Aryne Telnim in her shop in Tel Aruhn. The armor can also be stolen from containers near each of these vendors.

Gold Armor is sold by Lorbumol gro-Aglakh at the Vivec Guild of Fighters, or it can be stolen from the closet behind him. Gold Armor can also be found in the Lower Vault of the Redoran Vaults in Vivec. The armor in the vault is not owned but acquiring it will require bypassing a very difficult lock (90). This section of the Redoran vault is guarded at all times by wandering Ordinators and a clerk who remains stationary. Fortunately, its key can be found in a chest of drawers in one of the bedrooms of Dralor Manor located in Redoran Plaza.

Lastly, Gold Armor is also sold by Sirollus Saccus at the Hawkmoth Legion Garrison in Ebonheart. Unfortunately, a bug will cause him to wear the armor instead of offering it for sale, as it is stored on his person and has better stats than his usual attire. Steps for remedying this are outlined in the Bugs section below.

^1Can be worn by beast races. 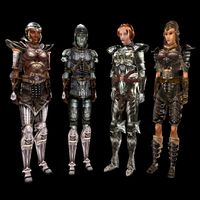