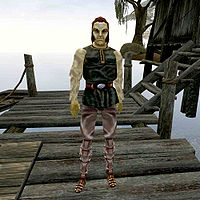 Caryarel is an Altmer thief who recently left an Imperial Cult infirmary with more than just a cure. He wears a common shirt with matching pants and shoes, and carries the key to his house. Aside from his natural weaknesses to fire, frost, shock and magicka, his natural bonus to magicka, and resistance to disease, he knows no spells.

"Yes. I was treated for swamp fever at the Imperial Chapels in Ebonheart. But I don't know anything about a Chapel Limeware Bowl. So go away. And leave me alone." Goodbye.

If you have the bowl in your inventory or have finished the quest:

"I don't know what you're talking about. You say you found a bowl in my shack? Well, you're a liar. So go away. And leave me alone." Goodbye.

"I have no idea what you're talking about."

If you have the bowl in your inventory:

"So? You have a bowl. What does that prove? Nothing."

After you have finished the quest:

"So? You SAY you found a bowl. What does that prove? Nothing."