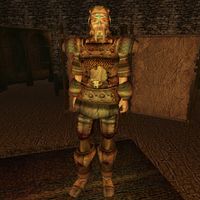 Alfhedil Elf-Hewer, a Nord barbarian, is the master trainer of the Axe skill, a major trainer in Blunt Weapon and Medium Armor, and can be found in the upper level of Falensarano Stronghold behind a trapped door. Apparently he has come to some agreement with the surrounding hostile witches.

Also of note is that he is the second-highest existing trainer of Medium Armor in the game.