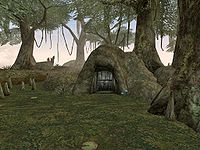 Abernanit was a Daedric Ruin located in the Bitter Coast region of Vvardenfell.[1] The site is notable for being mentioned in The Death Blow of Abernanit.

The Daedric Ruins of Abernanit were once used as a shrine for the worship of Mehrunes Dagon, one of the Four Corners of the House of Troubles.[2] Circa 3E 150, Abernanit was rediscovered as the Tribunal Temple was alerted to the horrors that laid within.[2] The most pressing threat was the possible resurrection of the Sixth House by its supposed heir, Dagoth Thras.[2] The danger was given further credence with the reawakening of the Sharmat Dagoth Ur 165 years earlier, which would lead to precautions such as the creation of the Ghostfence to contain the threat from spreading outside Red Mountain.[3] To quash this threat, the three living gods of the Tribunal personally blessed the hero Rangidil Ketil. The hero was given a contingency of Ordinators and Buoyant Armigers by the Tribunal Temple to send the House Unmourned back to its grave.[2]

Abernanit's dwellers were blessed with strength by Dagon and far outnumbered the legions of Ordinators and Armingers. Despite being greatly outnumbered, the cultists were held back by the Temple, and Rangidil noticed Dagoth Thras watching from his spire. Rangidil ordered a violent push to reach the heir, yet Thras continued slaughtering the army one by one, leading the hero to fall back while he alone ascended the tower to confront Thras. The battle proved to be one-sided, as neither Rangidil's Ebony spear, nor blade, nor mace could pierce through his foe's impenetrable defense. Rangidil resorted to trickery and flattery to bring Thras down. He appealed to Dagoth Thras's pride and asked the Mer to teach him how he blocks so well. Thras complied, stating it was down to his instincts and reflexes, but as he started to explain himself, he realized that he wasn't quite sure how he did it. As Dagoth Thras sat still trying to figure out how to explain his skill, Rangidil took the opportunity to deliver the killing blow.[2]

Circa 3E 427, the ruin's Daedric architecture was gone, and all that was left of Abernanit was a cave. The cave became occupied by smugglers, which kidnapped an Imperial citizen, leading to the intervention of the Imperial Legion. They sent an adventurer who cleared the cave and escorted the citizen away to safety, allowing them to return to Hammerfell.[4]