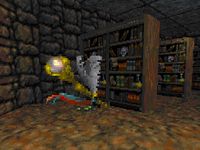 The evil focus, in this case a Religious Item 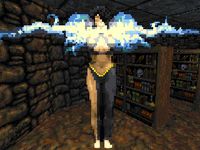 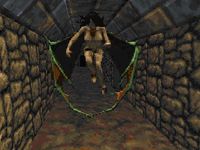 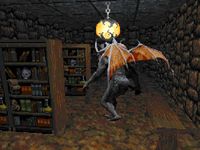 "(Player's name), my name is (quest giver's name). (Temple's god) has prophesied a great evil growing in the heart of a nearby dungeon. We need you to go destroy this thing. Will you do it?"

"There is no time to waste. Travel to the (dungeon). There you will find the (evil focus). Destroy it within (time limit) days and all will be well again. A sign will appear in the temple when this is done. Return to me and I will pay you well."

"I have no time to spare. I must find someone to take up this quest."

Travel to the specified dungeon and enter it. Search its depths for the evil focus. When you find the item in question, pick it up and see:

You have three options:

Destroy the Daedra Seducer and return the evil focus to the Temple. When struck for the first time, the Seducer growls:

Loot her corpse and make your escape. The Seducer's death draws the attention of a lot of enemies after you, so be prepared either to run or to fight. Deliver the item to the quest giver for your promised reward.

Accept the offer, and receive the promised magical item from the Daedra Seducer. If you choose this option, you will lose reputation with both your Temple and its deity. The Daedra Seducer will be still there, but she won't attack unless you attack her first. Although you will still have the focus in your inventory, you cannot bring it back to the quest giver; it simply won't be accepted. Therefore, you must wait until the quest's time limit expires, which will result in additional reputation losses.

Accept the magical item, but attack and dispatch the Daedra Seducer anyway. Travel back to the quest giver and hand over the evil focus to collect your reward. Using this option, you can complete the quest, get the magical item, and get your promised reward from the Temple. Additionally, no additional enemies will pursue you. However, you will end the quest with overall reputation losses.

When you return with the evil item and the Daedra Seducer dispatched, the quest giver will say:

"(Player's name), you have the thanks of all our clergy. The evil has been destroyed. As I promised, here is (random gold) gold pieces for your reward."

If you don't return the evil item within the quest's time limit, the quest will be considered failed.

If you accepted the offer of the Daedra Seducer, you will lose reputation according to the table below.

If you accepted the offer of the Daedra Seducer, but dispatched her nonetheless, you will lose reputation according to the table below.