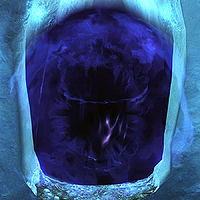 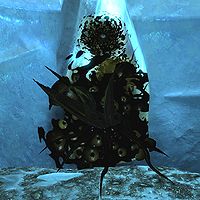 The Wretched Abyss, with Dragonborn installed

The Wretched Abyss is an avatar of Hermaeus Mora. It will appear to you twice during the quest Discerning the Transmundane.

As you approach, the abyss will speak to you and say, "Come closer. Bask in my presence." It will then go on to say, "I am Hermaeus Mora. I am the guardian of the unseen, and knower of the unknown. I have been watching you, mortal. Most impressive." If you have Dragonborn installed and you have defeated Miraak, he says "I have been watching you since you defeated Miraak, your progress is most impressive."

After asking it "What do you want of me?" the abyss will soon reply with, "Your continuing aid to Septimus renders him increasingly obsolete. He has served me well, but his time is nearing its end. Once that infernal lockbox is opened, he will have exhausted his usefulness to me. When that time comes, you shall take his place as my emissary. What say you?"

You may then reply with "I am your servant, my lord." or "I'll never join you, vile demon!"

If you choose to serve the Wretched Abyss, Hermaeus will not be surprised. The abyss will then respond with "Indeed. Speak with me when the box has been opened, and all shall be revealed."

If you instead choose the second option, Hermaeus will be somewhat angry but he will reply calmly with "Be warned. Many have thought as you do. I have broken them all. You shall not evade me forever." After this brief encounter, the Wretched Abyss will vanish, for a time.

Later in the quest, after the death of Septimus, the abyss once again blocks your exit. This time he praises your efforts: "Come, my champion." You may inquire further by asking "What now?" or you may condemn the Daedric lord by saying, "I am not your champion, monster."

If you choose the first option, Hermaeus will explain that "Now you have my Oghma Infinium. It contains the knowledge of the ages as revealed to Xarses [sic], my loyal servant. For hundreds of years it's been shut away from the world. Septimus was a useful tool for unleashing it. Now it is in your hands. Let us work wonders together..." After this brief encounter, the abyss will once again vanish, this time for good.

If you choose the second option instead, Hermaeus will be less than pleased and say, "Who do you think brought Septimus here? Who do you think protected you on your journey to open the box and loose my knowledge on this world? Your free will is an illusion. Whether you acknowledge me or not is your own business. But I will be in your mind."