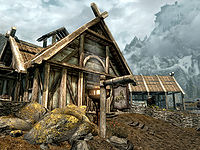 Whiterun Stables is a stable just outside the gates of Whiterun.

Whiterun Stables is owned by Lillith Maiden-Loom and operated by Skulvar Sable-Hilt, who also lives here with his son Jervar. You can buy a horse from Skulvar for 1000 gold.

The stables are to the right of the residence and consist of four stalls, two of which have gates on the front and always contain at least one horse. There are many food barrels in and around the stable and residence and a couple of red mountain flowers along the fence line. It is possible for both Skulvar Sable-Hilt and his son Jervar to die (see bugs). A carriage waits nearby driven by Bjorlam, while beside this, once you have completed The Blessings of Nature quest you will find Ardwen and her dog. 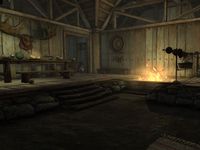 Inside the Whiterun Stables residence

The entrance to the stable residence is normally kept locked with a novice level lock, which can be opened by a key carried Skulvar Sable-Hilt, Lillith Maiden-Loom and Jervar. Entering leads into a large room with a fire pit opposite and a cooking spit to the right. There are two doorways off of this room, one to the right of the fire pit in the northern corner and the other in the western corner of the room. On your right when entering is a round wooden table and two chairs. On the table is a bottle of wine and a long taffy treat. To the left is a cupboard with a bowl containing a cabbage, a couple of pieces of cheese on the shelves and a bottle of wine and a food sack on top. Against the southwest wall is a long wooden table and bench with a portion of grilled leeks, a bottle of Nord mead, a bottle of wine, a cabbage, a bowl containing green apples and a plate of bread and cheese on top of the table. Hanging from the rafter above are four garlic braids and three whole salmon.