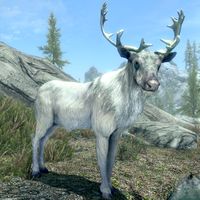 The White Stag in Falkreath Hold

The White Stag is a unique animal which appears during the quest Ill Met By Moonlight. It's much larger than a normal deer, and its fur is much lighter as well.

According to Sinding, the stag roams Falkreath Hold while Hircine awaits a hunter skilled enough to kill it. However, the stag does not appear until the related quest is started.