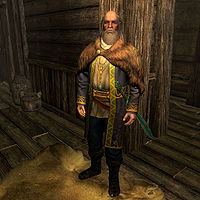 Vulwulf Snow-Shod, a Nord warrior, is a staunch supporter of the Stormcloaks, and the patriarch of Clan Snow-Shod. He is husband to Nura Snow-Shod, a Talos priest, and their sons are Asgeir and Unmid. Their daughter, Lilija, became a battle maiden for the Stormcloaks at the start of the rebellion and was killed by Imperial soldiers. Consequently, Vulwulf is resentful to all Imperial troops and supporters and makes no attempt to hide this.

Devastated by the loss of his daughter, Vulwulf now spends much of his time drinking at the Bee and Barb, trying to forget about the great loss he has suffered. Because of his current lifestyle, Vulwulf wakes up late at 11am. He will head downstairs to find a seat and have a one-hour brunch. At noon, he leaves his house to head to the Bee and Barb. He will stay here for the next six hours, drinking and eating while seated at one of the tables. He will leave the inn at 6pm to head back to his house for a two-hour dinner with his family. At 8pm, Vulwulf will return to the Bee and Barb for more food and ale. He will stay here until 3am, when he staggers his way back home. He will then head upstairs and sleep for the next eight hours.

Vulwulf wears a set of fine clothes along with a matching pair of boots. He carries his key to the house, a belted tunic, a bottle of Black-Briar Reserve, and a selection of upper-class loot and gold. In combat, he relies on a leveled sword of the best possible quality for your level.

The first time you approach him, Vulwulf will be a bit wary of you and will remark: "Hm. You're not from around here. Imperial spy perhaps?" If you are an Imperial, his attitude will remain equally hostile: "Be brief Imperial, there's only so long I can stand being downwind of your stench." However, if you are a Nord he will be much more friendly: "Ah! A fellow Nord! I trust you're bringing the fight to the Empire." He clearly is a strong opponent of the Empire, as he will often remark: "If your allegiance lies with the Empire, we haven't much to discuss." You can ask Vulwulf why he has so much hatred for the Empire, which will then have him reveal the cause of his daughter's death: "They mean to take our history and crush it all in the name of some damn treaty. The soil beneath our feet is steeped in the blood of our ancestors. We've fought for this land and... died for it. I lost my own daughter to the Imperial dogs, and by Talos I'll not lose anyone else!" You can then ask him to elaborate on what happened to his daughter, to which he will painfully tell you about how she died while serving as a battle maiden for the Stormcloaks: "Lilija joined the Stormcloaks many years ago, when the first of the skirmishes broke out across Skyrim. I was so proud of her. She served as a Battle Maiden, using her healing arts to help those that fell on the battlefield. Never even lifted a blade in her life. It didn't matter. The Imperial soldiers cut her down... killed her like a dog and left her body to rot in the mud. And that's why I won't rest easy until every single Imperial soldier joins her, and Ulfric sits upon the throne of Skyrim." If you are an Imperial, he may end conversation quite angrily: "Imperial bastard." Regardless of your race, he may also end conversation by reminding you to support the Stormcloaks: "Support Ulfric or die trying. There's nothing in between." or "Farewell,kinsman" if you are a Nord and joined the Stormcloak Rebellion. 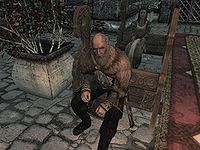 During this quest, Vulwulf and Nura will travel to Solitude to attend their son's wedding to Vittoria Vici, an Imperial businesswoman. Despite being in Imperial territory, however, he will not drop his hatred for the Empire, as you can find him engaging in a political debate with Alexia Vici, Vittoria's mother:

Vulwulf: "Typical Imperial rot. You speak of Skyrim like you know the land, know its people. You're from Cyrodiil! You know nothing about us! Nothing!"
Alexia: "Oh, I know enough. I know those trouble-making Stormcloaks refuse to submit to Imperial authority. Such seditious behavior. Why it's treason!"
Vulwulf: "And when the elves marched into your beloved Cyrodiil, and everyone took up arms against them, wasn't that treason? Against the Dominion? Huh?"
Alexia: "Why that's not the same thing at all. The Dominion were invaders. Conquerors. We had to fight them, to preserve our own way of life."
Vulwulf: "My point exactly."

Vulwulf may also comment, "I still think my boy should have had a traditional Nord wedding. Outside, in the cool mountain air.", "My boy, he always did have an eye for the pretty ones. That Vittoria ain't bad, for an Imperial.", and "They say this marriage is the first step towards peace. Who in Shor's name wants peace? Pfft." Should you ask him if he's having a good time, he will answer, "No, I'm not having a good time. My boy just married a gods-forsaken Imperial. Skyrim is full of eager Nord women, and he beds down with the enemy."

As Vittoria dies, Vulwulf will be quick to blame the Empire: "It was the Empire killed her! I know it! They killed her so they can blame it on the Stormcloaks!" If Asgeir dies too, he will scream, "My son is dead! At his own wedding! Only those Imperial dogs would have dared do something like this! Damn them all to Oblivion!"

At the Bee and Barb, Vulwulf may ask his son Asgeir to drink to those fallen Stormcloaks with him:

Vulwulf: "Drink up, my boy! Drink to those who have fallen! May their souls find their way to Sovngarde!"
Asgeir: "Take it easy, father. You're making a scene."
Vulwulf: "I'll rest easy when we've driven every last Imperial pig back across the Jerall Mountains!"
Vulwulf: "Now, do me the honor I deserve as your father and drink up!"
Asgeir: "Yes... father."

Sometimes, he may also be seen being angry with Talen-Jei about his drink:

Vulwulf: "Talen! Another round!"
Talen-Jei: "I think you've had plenty, Vulwulf. Maybe you should head on home."
Vulwulf: "You stupid lizard! I said give me some more drink, or I'll have your head on a pike!"
Talen-Jei: "Suit yourself."

Vulwulf can be seen talking to Maven Black-Briar while inside the Bee and Barb:

Maven: "I'm telling you, Vulwulf, it's the investment you've been waiting for."
Vulwulf: "So I pay for the weapon shipments and you oversee their distribution to the Stormcloaks?"
Maven: "Exactly. What better way to help the cause than to put weapons into the hands of young Nord warriors dying for their homeland?"
Vulwulf: "Shor's Beard! You're right! I'll do it... provided you supervise the shipments personally."
Maven: "Don't worry, I'll treat those shipments as if I owned them myself."

Vulwulf: "Maven! So good to see you again. Hoist a flagon and celebrate with me!"
Maven: "Vulwulf, it's always a pleasure. When you're standing downwind of me."
Vulwulf: "Sorry, what was that?"
Maven: "Nothing Vulwulf.... cheers."

He can be seen talking to his family while inside his home:

Nura: "How are things at the Meadery, my dear?"
Vulwulf: "Not this again..."
Nura: "Hush, Vulwulf... let the boy speak."
Asgeir: "It's going very well, actually. The war hasn't even slowed down our production or shipping at all."
Vulwulf: "Of course it is. That's what happens when you're partners with a corrupt Imperial whore like Maven."
Nura: "Vulwulf! The Empire may be our enemy, but Asgeir is still our son and we're a long way from Cyrodiil."
Asgeir: "Father, I promise you, this has nothing to do with Empires or politics. It's just business."
Vulwulf: "It has everything to do with politics. Asgeir my son, you have so much to learn."

Nura: "You need to be easier on Asgeir. All he wants to do is please you."
Vulwulf: "It would please me if he'd take up arms and fight for [sic] to save his homeland. Is that too much to ask my own son?"
Nura: "That's right. He is your son. He has his own hopes and dreams and we have no right to tell him otherwise."
Vulwulf: "You can't deny the fact that he needs to give back to his people; to fight to keep us free. You healed the wounded, Nura. You saw their life's blood spilling into the mud, giving back to the land. No. I'm sorry, I've worked too damn hard to let his life go to waste."