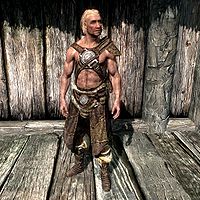 Vilod is a Nord warrior living in Helgen at the beginning of the game. He is not encountered again after the tutorial, likely having perished in Alduin's attack.

He wears hide armor and hide boots, and wields an iron dagger.

During the carriage ride at the beginning of the game, Ralof will speak of Helgen and mention Vilod: "I wonder if Vilod is still making that mead with juniper berries mixed in." He is present at the execution, although hidden from view. He can be heard shouting "Justice!" as a Stormcloak rebel is beheaded.

You will encounter him again while Hadvar is escorting you to the keep. He is seen wounded and sitting down near General Tullius. If you approach, he can be heard making a dying request: "Tell my family I fought bravely." An Imperial soldier will reply with: "The wounds are deep, Vilod! I can't stop the blood." This is the last you see of him.