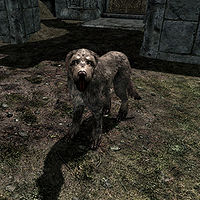 Vigilance is a war dog that you can purchase for 500 gold. He is found next to the stables outside Markarth with his owner, Banning, who hints that Vigilance's ferocity was brought about by feeding him human flesh. Once purchased, he will fight beside you until killed or dismissed.

If dismissed or made to wait for more than two days, Vigilance will return to the Markarth stables and you will need to pay the 500 gold price in order to recruit him again.

Vigilance accompanies you like a regular follower would, but he only understands "wait/follow" and "go back home" commands. Other commands and access to his inventory are not available.

Vigilance is not adept at stealth. When you are sneaking up on an enemy, Vigilance will often race forward to attack, which can break your stealth at lower levels.

Vigilance is one of the animal followers that can be adopted as a pet with the Hearthfire add-on.