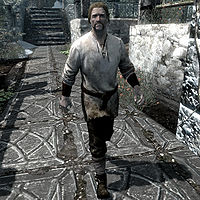 Torsten Cruel-Sea is a Nord farmer working and living in Windhelm. He is the patriarch of important clan Cruel-Sea, he also owns the large farm east of the city, Hollyfrost Farm, where Tulvur works alongside his two dogs, Tiber and Ysgramor. Torsten lives in his clan's estate with his wife, Hillevi, their son, Grimvar, and their son's caretaker Idesa Sadri. Sometime before the events of Skyrim, Torsten also had a daughter named Fjotli who was recently murdered.

Torsten starts his day by having a big breakfast at 7am that lasts for two hours. Once his breakfast is finished he will head to his farm and work there for five hours straight. After his daily chores are done, he will over to the marketplace at 2pm for five hours of browsing. When he is done with his browsing, Torsten heads to Candlehearth Hall to eat his dinner. After three straight hours of enjoying dinner, Torsten heads to the Palace of the Kings at 10pm to talk about the navy with the war strategists. He does this for two hours before heading home and finding a bed at midnight. On Morndas, Middas and Fredas, Torsten doesn't seem to be in the mood to talk about the war and just lounges in the main hall of the palace for two hours.

He wears a set of miner's clothes along with a pair of boots. He carries his key to the house along with a selection of upper-class loot and gold.

Torsten often expresses regret that he became a farmer, rather than a sailor like his ancestors. This regret can be clearly seen when he greets you "I own Hollyfrost Farm outside the city. It's honest work, if a bit dull.", "The Cruel-Seas have been sailors for generations. In truth, I regret not following in the footsteps of my ancestors.", "If I make enough money from the farm, I'll buy myself a longship to sail the rivers of Skyrim."

His regret is even more clear when ending conversation with him: "I should have been an adventurer like you, instead of a farmer.", "Never trade a sword for a hoe, my friend."

When you are ready to perform the special assignment for the Thieves Guild in Windhelm, Delvin Mallory will give you more information: "Got word from Torsten Cruel-Sea in Windhelm that a rival Guild is tryin' to get itself started. Not only that but they're givin' us thieves a bad name by murderin' their marks. Get over there and see what you can do."

Once you head over to Windhelm and speak with Torsten, he will immediately get emotional and share the story of his daughter: "My daughter Fjotli... she was murdered a few months ago. Left her laying on the ground in a pool of her own blood. I assume they were after her valuables... she always wore far too much jewelry in public. When I told her it'd be the death of her, I never thought..." You can assure him that no-one from the Thieves Guild did it, and he'll say "No need to explain, I'm well aware of your Guild's methods. It took me weeks, but I finally tracked down the killer. A bloody Altmer at that. Can you imagine?" If you ask what happened to the Altmer, a grim Torsten will say "Let's just say I'm a firm believer in an eye for an eye and leave it at that. He fancied himself a thief in some sort of a new Guild forming around here. Gave me some valuable information before... well, you know." If you ask what he expects of you, he'll say "Well, like I told Delvin, I think we can help each other. You recover what I'm looking for and take out a rival Guild in the process." When asked if the stolen item concerns Fjotli, he'll confirm: "Exactly. One of the pieces stolen from her was a silver locket, a Cruel-Sea family heirloom. I want it back." Torsten didn't get much information out of the Altmer, but he can give you a lead: "The only name I have is Niranye. Has a house right here in Windhelm. That's where you should begin looking."

When you return Fjotli's locket to him, an emotional Torsten will say "It pains me to see this locket... to be reminded of Fjotli once more, but I'm glad it's back where it belongs. Tell Delvin that if he still desires to have my support for the Thieves Guild in Windhelm, he's got it."

Torsten's young son, Grimvar, thinks the world of him and will often mention how important he is when greeting you: "Do you know my father? He's really important. He even talks to the Jarl sometimes.", "All the Argonians at the docks are nice to me. Good thing, too, or father would run them off!" Asking him who his father is will result in him explaining the family name: "His name is Torsten Cruel-Sea. He's really rich, 'cause he owns a farm called Hollyfrost. He told me once that he wanted me to grow up and be a sailor, 'cause that's where our family name comes from. But I don't want to be a sailor or a farmer. I want to be a warrior! The strongest one ever!"

Torsten's farm hand, Tulvur, might also mention his habit of coming to work at the farm when greeting you: "Master Cruel-Sea comes and works the fields sometimes. I don't think the Mistress likes it, but she won't come out here to catch him."

He's apparently not a very devout man, as priestess Jora will say "Hillevi Cruel-Sea comes in a lot, but I haven't seen her husband here in years."

His clan wil also get mentioned by Captain Lonely-Gale when you speak with him about Windhelm's prominent citizens: "The clans Shatter-Shield and Cruel-Sea see most of the gold that passes through the city."

Lastly, his wife, Hillevi, will also mention him during a conversation with Nilsine Shatter-Shield:

Nilsine: "Is that new batch of tomatoes ready for sale yet, Hillevi?"
Hillevi: "You know, I'm not sure. My husband's been tending to the vines, so I'll have to ask him."
Nilsine: "Just promise me when you get some more in, I'll have the first crack at them."
Hillevi: "What is it Ulfric's always saying... "On my honor as a Nord, I swear it. (Laughter).""
Nilsine: "So serious! (Laughter)."

When Torsten pays a visit to his farm, he might engage Tulvur in conversation:

Tulvur: "Sir, I'm going to need some better equipment if you want me plowing the frost."
Torsten: "Like what?"
Tulvur: "Well, some tools that aren't rusted through would be a start."
Torsten: "I'll provide you wood and timber to make whatever riggings you'll need."
Tulvur: "I'm not building a ship, sir. I'm trying to make things grow."

Torsten: "Tulvur! I've just completed inspection of the farmhouse."
Tulvur: "Oh?"
Torsten: "It's filthy in there! Dirt everywhere, and it looks like the dogs have the run of the place."
Tulvur: "Well, sir, it's a farmhouse. It's not going to be as clean as your house in the city."
Torsten: "I just know that our sailors are able to keep their ship quarters clean, and I expect the same of you."
Tulvur: "I'll do my best, sir."

Torsten will also chat with vendors at Windhelm's marketplace, including his wife and Aval Atheron:

Torsten: "How's business today?"
Hillevi: "Well enough, I suppose. Nilsine bought up most of the tomatoes, and was asking if we could get more."
Torsten: "We've got another dozen ripening on the vine. They should be ready in a few days."
Hillevi: "I'll be sure to tell her."

Torsten: "Did you have any luck tracking own [sic] some more pitchforks?"
Aval: "Revyn put the word out to his suppliers but with the war on, tools are scarce. Both sides have been snapping them up."
Torsten: "Tell him I'll pay double the normal price. We've been getting by with one broken pitchfork, but it's falling apart."
Aval: "I'll be sure to stress your urgency. It seems like every farmer in Skyrim is short on supplies these days."

Due to his status and clan's history, Torsten will also speak with Ulfric Stormcloak about forming a navy for the Stormcloaks:

Ulfric: "I'm still not sure I understand what you're asking."
Torsten: "A navy, my lord. We could stop the influx of Imperial troops to Solitude, and choke their northern lines."
Ulfric: "But most of their supply routes come south, from Cyrodiil."
Torsten: "But imagine -- fleets of ships sailing from Windhelm, all bearing the Stormcloak flag! It would be glorious!"
Ulfric: "And I suppose the Cruel-Seas would be just the clan to provide ships and men?"
Torsten: "You need but ask."
Ulfric: "I'll think on this, but I make no promises."
Torsten: "I can ask no more. Thank you, my lord!"'