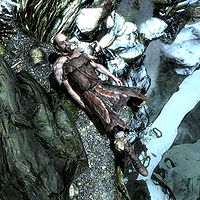 Thomas, a Breton bandit wizard, was an unlucky adventurer who tried to climb down a hole into Bleak Falls Barrow to kill a troll. Unfortunately he slipped and landed on a ledge, which killed him. His body can be found when looking up the walls in the brightly lit room with the bridge and the waterfall.

He wears a set of fur armor and a pair of leveled boots (up to scaled quality), and is equipped with an iron dagger. He carries a note, has a 25% chance of carrying a lockpick, and has a 25% chance of carrying 2-9 gold. Looting Thomas is not straightforward as there is no way to get to the place he died. It is however possible to get his corpse down with shouts, arrows or a raise dead spell.