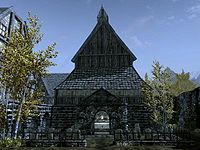 †Syndus, Herluin Lothaire, Arnskar Ember-Master, and Vanryth Gatharian are vendors added (in that order) during Under New Management.
‡Only appears during A Cornered Rat if left alive during Diplomatic Immunity.
*Relocates to the Cistern or elsewhere after related quest(s).
DGAdded by the Dawnguard official plug-in. Enables you to change your character's appearance.

††Other Thieves Guild quests exist, but do not require you to enter The Ragged Flagon or Cistern.

You can only access the second entrance once you have joined the guild and completed Taking Care of Business. To enter the headquarters using this entrance, press a small button in the center of the tomb; this opens a secret stone staircase. Descend it and open the sewer covering. To exit directly from the Cistern, climb the ladder in the alcove to the southwest, then pull a chain to retract the tomb.

As you progress the Thieves Guild questline, complete reputation quests for Delvin Mallory, and complete miscellaneous guild quests, the headquarters will be upgraded, and additional thieves will move in.